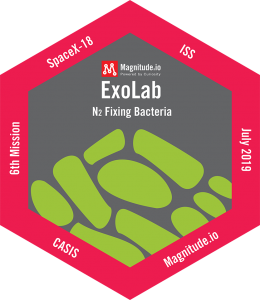 Bacteria are critical in the support of nutrient uptake by plants, and ultimately, all life on Earth. If humans are going to explore other planets or spend extended time in interplanetary space, they are going to need a way of producing a sustainable food source.

In the first five ExoLab missions, we explored the effects of microgravity on the germination and seedling development of plants. Starting with Arabidopsis thaliana, and then most recently the microgreens amaranth, pak choi, purslane, and wasabi, we found the most difficult aspect of the environment onboard the International Space Station to be heat stress. However, we have established through these five missions that it is possible to grow food plants in microgravity. One must next consider how to sustain the food plants in space.

All plants require a significant amount of nitrogen to be able to synthesize amino acids. Since the Earth’s atmosphere is largely nitrogen, one might think that plants would have no problem acquiring the levels of nitrogen required. Unfortunately, for the plant, atmospheric nitrogen (N2) is not bioactive, and therefore unavailable for plant use. Enter the soil microbes that perform the role of nitrogen “fixation,” or converting atmospheric nitrogen into ammonia. Two key species are responsible for nitrogen fixation: Azotobacter and Rhizobia. Azotobacter is free-living in the soil, while Rhizobia work in symbiosis with leguminous plants.

In our upcoming sixth ExoLab mission, we will be sending Azotobacter and Rhizobia to the ISS! How will these soil microflorae be affected by the conditions of the space environment?

We hope you and your students will join us on our next mission to find if we can support plant life long-term in space. ExoLab Mission 6 is scheduled to launch aboard SpaceX CRS-18 in July.

Nitrogen fixation is an essential process of agricultural systems and a necessary component for translating agriculture to spaceflight environments. The results of this study further our understanding of how specific strains of bacteria can aid in the successful growth of crops in space.

The experiment launched on July 2019 aboard SpaceX CRS-18. Following installation the International Space Station, it will run for 28 days and moved to cold storage until return on the Dragon Capsule.

Soil microflora are critical to converting nutrients into forms that can be absorbed and utilized by plants. The Microbial Nitrogen Fixation experiment informs our understanding of nitrogen fixation responses of selected microbes in microgravity, with potential to improve our understanding of the impact of climate change on soil productivity.

ExoLab6/TangoLab Mission-13 takes place in a sealed 2U CubeLab populated with eight petri dishes. Two species of nitrogen fixing bacteria are included in the investigation, each on three petri dishes. The remaining two petri dishes are inoculated with E. coli to serve as a control. The CubeLab is turned over at L-3 for cold stow to deter growth until installation on TangoLab. The experiment runs at ambient conditions in the TangoLab, and imagery and sensor data is collected on regular intervals. After experiment completion, the CubeLab is returned in cold stowage (4oC) for further ground analysis.

Students will run ground analogs to the Flight 6 experiment in two parts, first with Rhizobia, followed by Azotobacter. Each trial will consist of four petri dishes. Students will document and share observations with the ExoLab network.

Ground versions of the CubeLab, known as the ExoLab, are distributed across more than 150 schools in the United States, Canada, South Africa and Germany. These schools collaborate, through the Magnitude.io platform, in the investigation of the effects of the microgravity environment. Students are able to compare the experiment onboard the International Space Station alongside their own classroom lab, as well as the labs in other schools in the network.